THE HISTORY OF ANIMATION

Animation is the process of designing, drawing, making layouts and preparation of photographic sequences which are integrated in the multimedia and gaming products. Animation involves the exploitation and management of still images to generate the illusion of movement.

5 Basic Types Of Animation
(information and images from the web www.nyfa.edu)

Here is some information about Images in Motion, the History of Animation. Here is a brief trailer and introduction to PIXAR STUDIOS, founded February the 3rd, 1986, by Steve Jobs, Ed Catmull and John Lasseter.


If you have some more time, here is the full documentary about PIXAR STUDIOS.


Here is the famous and amazing speech by Steve Jobs at Stanford, 2005. But first let's get a little bit more infomation about him:

SOME EXAMPLES OF FLIPBOOKS:

Draw a 6 cm radius circumference and divide it in 12 equal parts, then colour the primary, secondary and tertiary colours (in this order) using only the three primary colour pencils. Write the names of the colours and divide it in two parts, indicating warm and cool colour schemes. 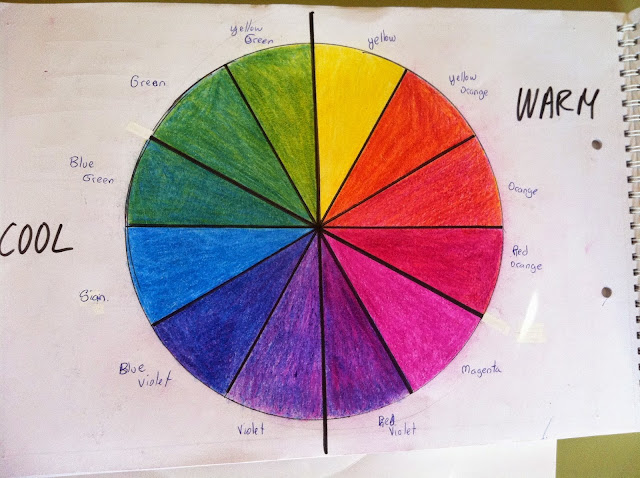 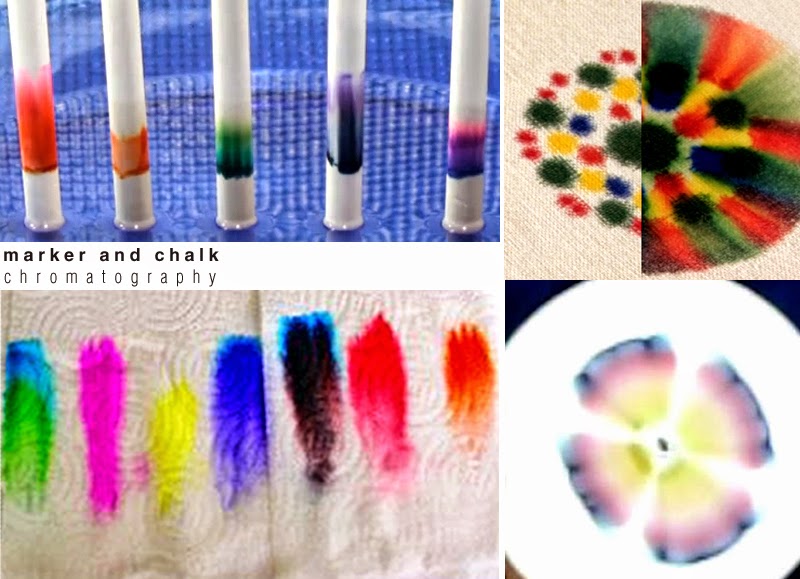 Chalk Chromatography - Is green just green? Conduct an experiment with markers and chalk to find out what colors make up a single colored marker. After your experiment, draw with your colored chalk!
PLAY-DOH COLOUR WHEEL ACTIVITY
CLICK ON THE COLOUR WHEEL TO FIND OUT MORE ABOUT IT 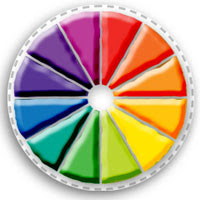 ELEMENTS OF ART:
"POINT, LINE, SHAPE, FORM, VALUE, TEXTURE, COLOUR, SPACE"
HOW MUCH DO YOU KNOW ABOUT COLOUR? 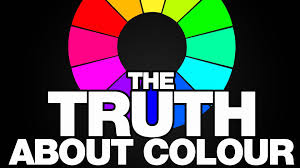 Interpretation of "Twilight in Venice" by Claude Monet. 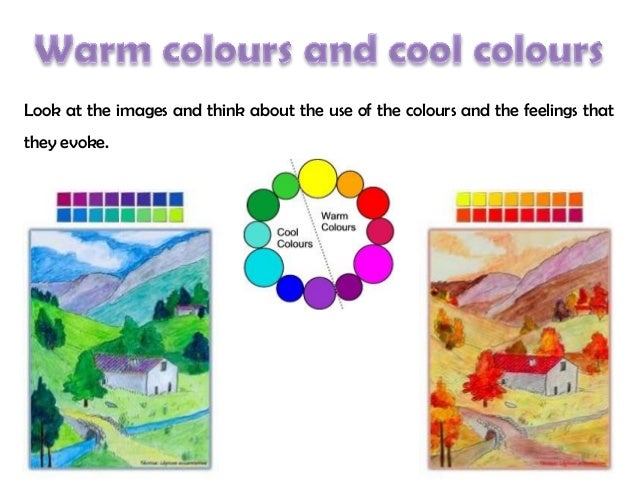 Yaacov Agam  (born 11 may 1928, Israel) is an Israeli sculptor and experimental artist best known for his contributions to optical and kinetic art.

Techniques used for applying shading to an object are quite varied. Each technique produces a different texture and "feel" to the drawing. The drawing medium used may determine the shading technique that is applied in the drawing.
The most common application techniques include:
Hatching - Lines drawn in the same direction. By drawing lines closer together, darker values are created. Leaving more space between lines results in lighter values. For rounded objects, the lines may curve slightly around the form - following the contours of the object.

Blending - Smooth gradations of value are produced either by adjusting the amount of pressure applied to the medium or by using a blending tool, such a blending stump.

Rendering - Using an eraser to remove the medium to produce lighter values. This technique is typically used in conjunction with blending.

Random lines - Loose applications of crossing lines. The frequency in which the lines cross over each determines the value produced.

Stippling - Applying countless small dots to build up darker values in a drawing. The density of the dots determines the value produced.

SEE ALSO : How to create smooth shading with graphite

The Illusion of Light
It's easy to get caught up in the technique in which the material is applied and loose sight of the reason why we apply shading in the first place.
Light is how we see, after all, and shading informs us of the light within a scene. We understand the light within the scene through the use of value and contrast.

Value is the darkness or lightness of a color. Light values are called tints and dark values are called shades.
Contrast deals with difference. Contrast is produced when any difference between elements such as texture, color, size, or value occurs. It can be subtle or extreme. When it comes to shading, we are mostly concerned with the contrast that is produced from changes in value.
When light hits the subject, it produces a range of contrasting values. The intensity of the light determines the contrast of values. Generally, the stronger the light - the higher the contrast. 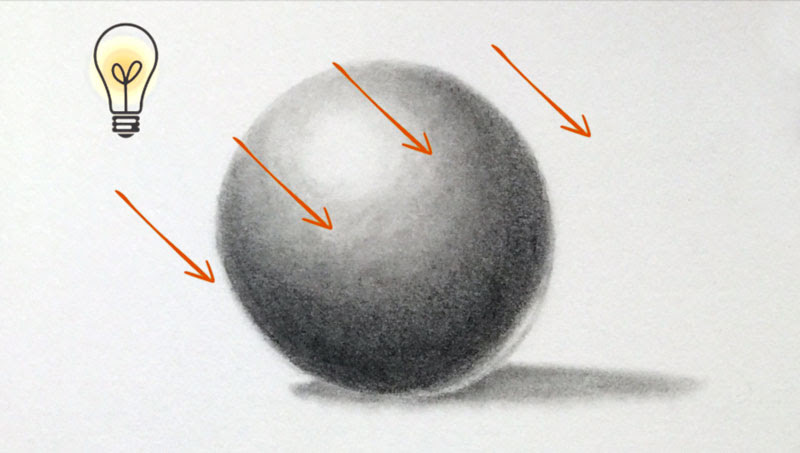 Values are arranged on the subject according to the location and intensity of the light source (or sources). To simplify the manner in which light behaves on a subject and surrounding objects, we'll look at what happens with just one light source on a smooth surface. 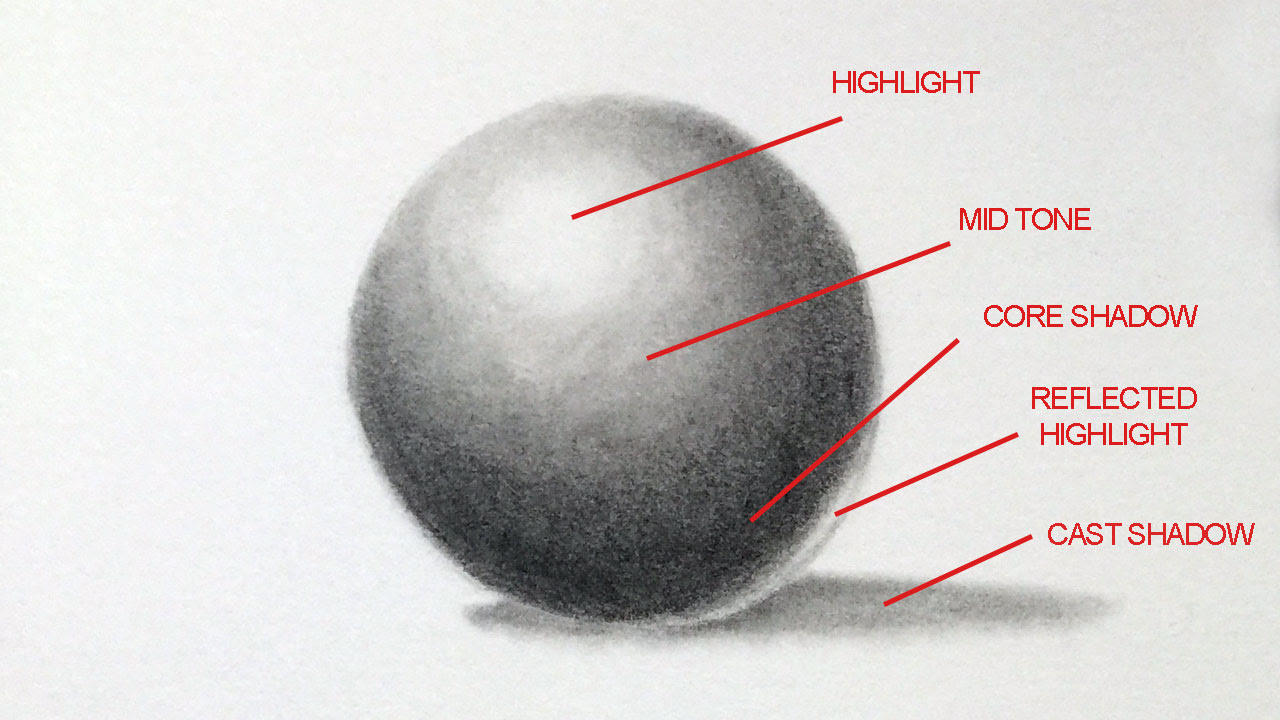 Highlight - The highlight is the location on the subject where the reflection of light is most intense. Highlights are typically indicated by a very light value of the color or in some cases - white.
Mid Tone - Mid tones are areas on the subject where some light is hitting, but in a manner that is less intense than the highlight. In many cases, the mid tone is the actual color (local color) or value of the subject.
Core Shadow - The core shadow is the area on the subject where light is prevented from hitting, producing an area of shadow. Core shadows are typically darker values of the local color.
Cast Shadow - Cast shadows are locations of darker value that result on surrounding objects or surfaces. Light is blocked from reaching these areas completely because another object is reflecting much of the light away.
Some light is reflected back off of surrounding objects and surfaces. This light bounces back onto objects producing an area of lighter value. 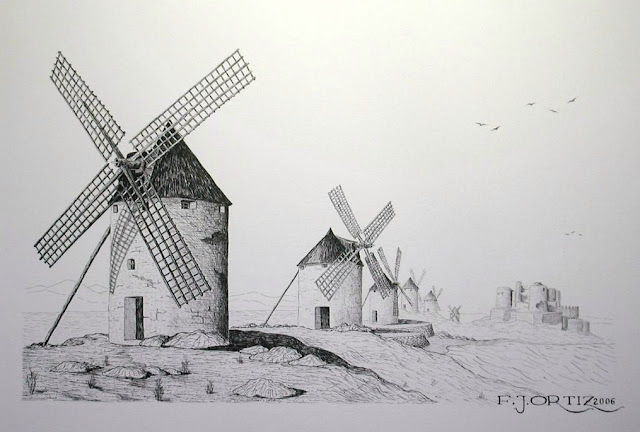 3D ART: A QUESTION OF PERSPECTIVE
The wife of 15th-century Italian artist Paolo Uccello used to beg him to come to bed. She was fed up of him staying up all night drawing objects with the new method of 3D illusion – or as it was called at the time, "perspective". He still wouldn't come to bed. "This perspective is such a sweet thing," he said.


As you already know we live in a three-dimensional world: 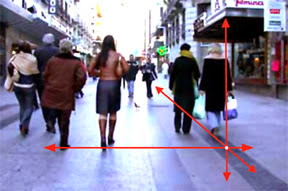 1. Height  2. Length  3. Depth
We can change or viewpoint, trasnforming the way we see things. That way objects seem to be smaller of bigger depending whether we are close or far away from them. The same way objects might seem to vanish or disappear when we move around them or we move away from them. Light also plays a very interesting role in the way we perceive objects. 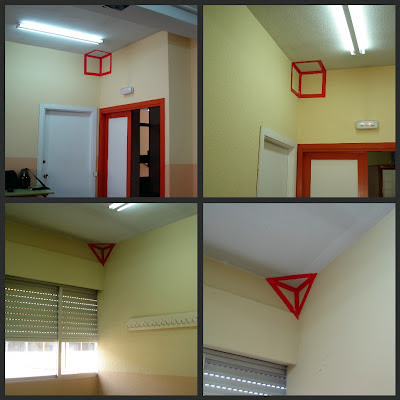 Now let's watch a few tutorials
How to draw ONE POINT LINEAR PERPECTIVE:

How to draw TWO POINT PERPECTIVE:

How to draw AN OPTICAL ILLUSION AND 3D EFFECT:

How to Create THE ILLUSION OF DEPTH AND SPACE

One of the ELEMENTS IN ART IS DEPTH AND SPACE.

Use them together to maximize the illusion. 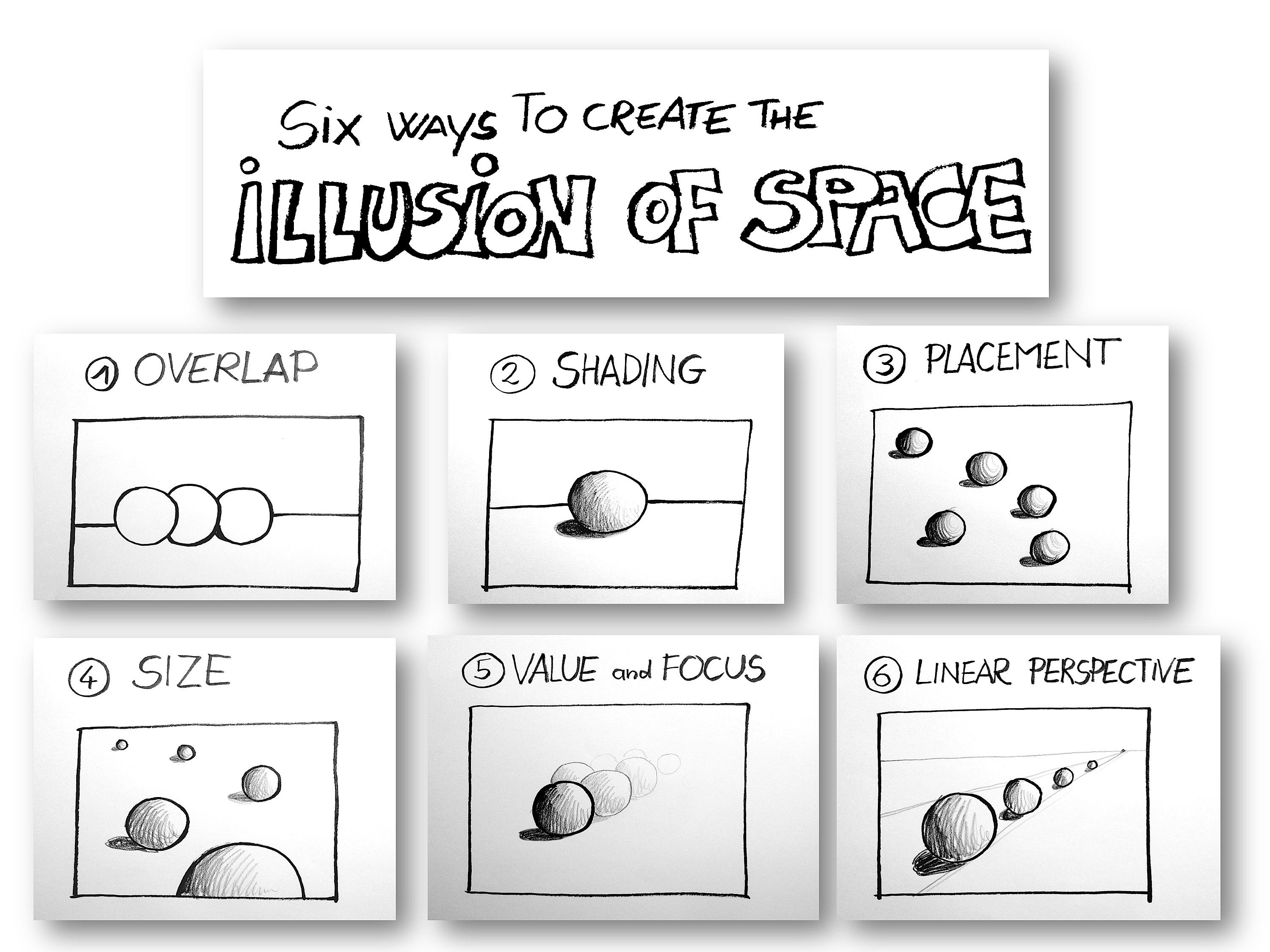 How to Create Depth

1. Overlapping - When one object is positioned in front of another object, part of the object behind it may be blocked from view.  This is called overlapping.

How to draw a landscape using ATMOSPHERIC PERPECTIVE: 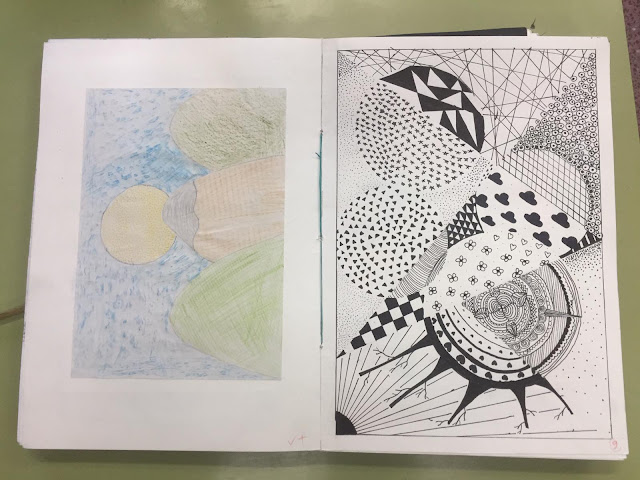 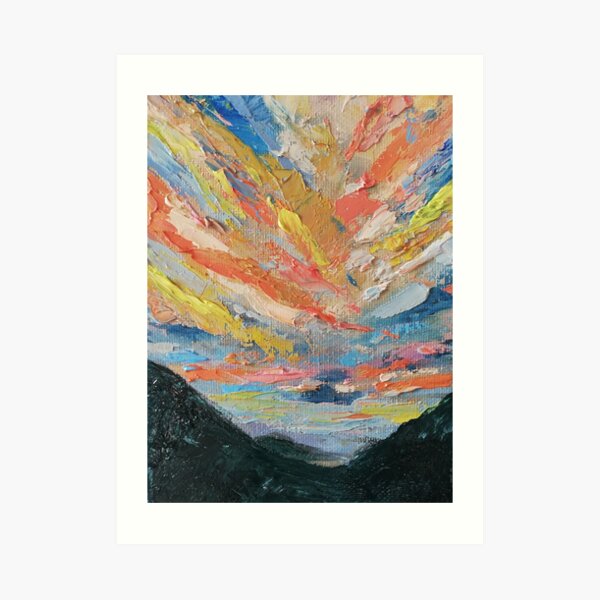 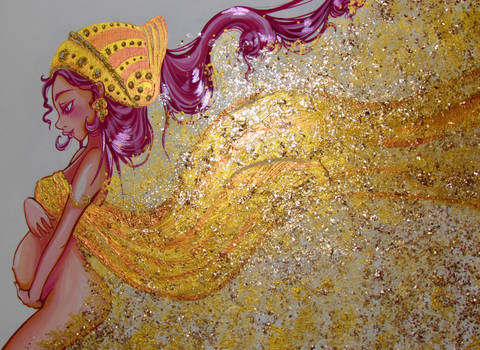 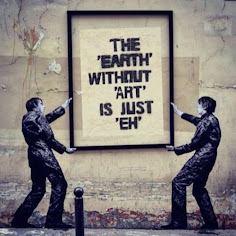 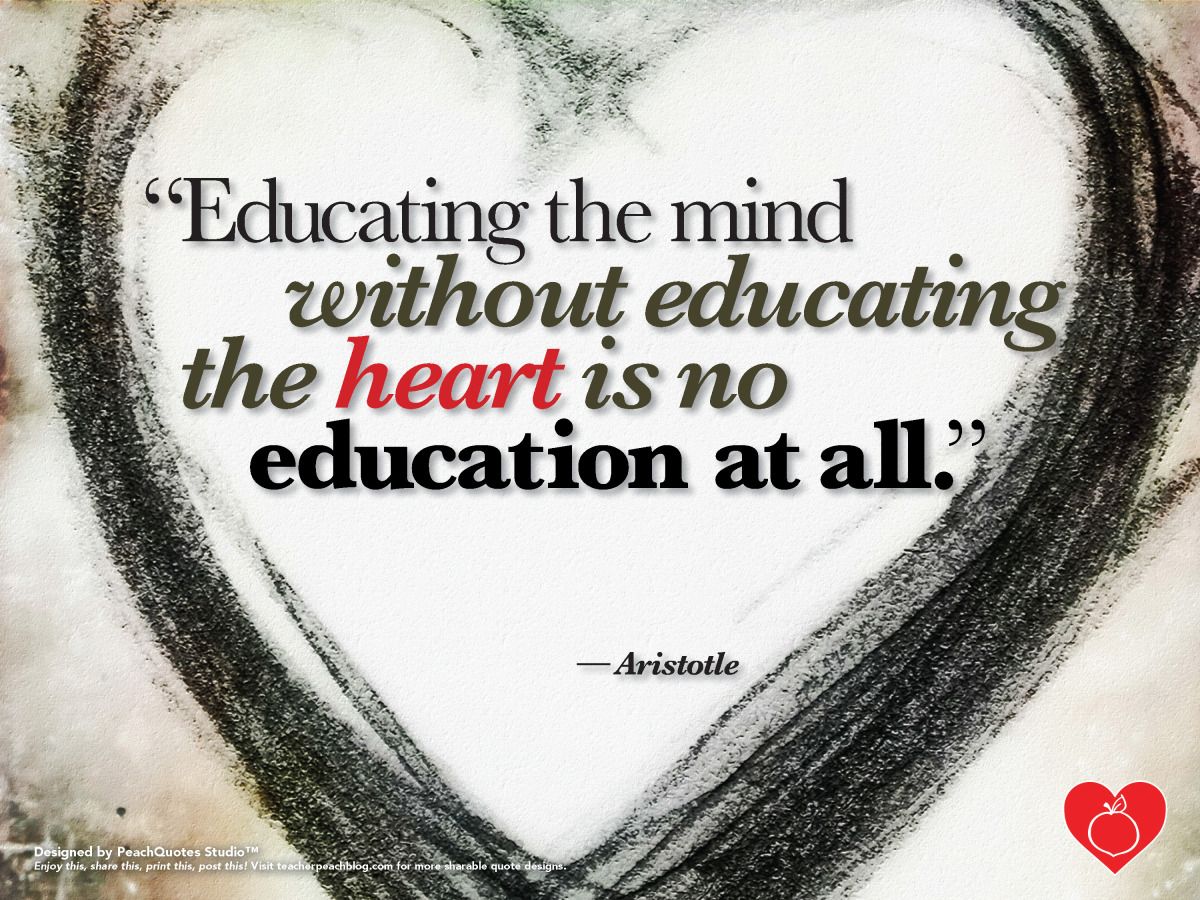 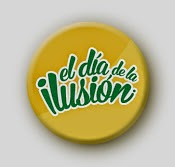